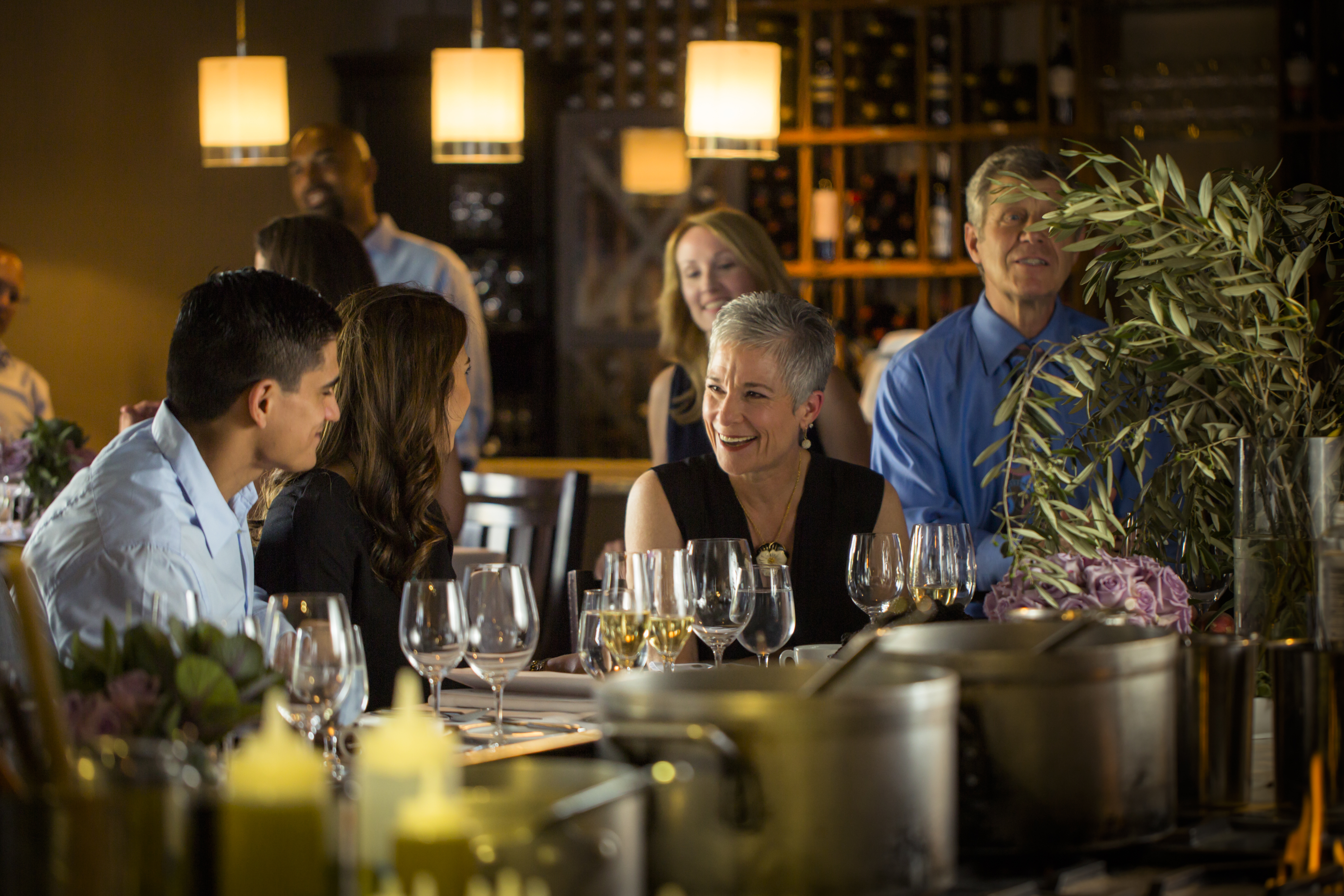 Chef’s Notes: A Middle Eastern proverb states, “He who fills his stomach with melons is like he who fills it with light.” So, with the warm days of Summer working their magic on sweet local melons, we present our first course to you. Watermelon is infused with basil and cilantro accompanied by sweet cherry tomatoes. Exceptional Hawaiian ahi tuna is tossed with fire roasted poblano crema and Mexican lime juice, creating an amazing taste of Summer.

Chef’s Notes: Though there are many stories as to how Brandade became such an enigmatic dish of Southern France – maybe trading with the countries of Northern Europe, through the Basque region, or even from the triangular trade route in part created by Jacques Cartier while claiming the mouth of the Saint Lawrence River for France – it really matters not. What really matters is the undeniable magic that happens when milk poached cod meets fire roasted eggplant. Playing on this, we wrap our Brandade in tender saffron pasta, nestled with a piperade of roasted market peppers and bathed in a rich rosemary jus. Jacques would be proud.

Chef’s Notes: Californians are known for their love of speed. Travel any stretch of open highway in the Golden State and you soon realize that the speed limit is only merely a suggestion. It’s no short coincidence that our state bird is no slouch when it comes to a turn of speed, being clocked at up to 40 mph in short bursts of flight. We think it has developed this speed in response to it also being quite delicious. Though at this point we are not after our speedy state bird, we are sourcing some amazing farm raised birds from nearby Suisun Valley. Cured and pan roasted to a caramelized peak, we are serving them atop rainbow chard braised in parmesan cream with hints of black pepper.

Chef’s Notes: With Summer comes many culinary delicacies. Over the year we look forward to ripe tomatoes, juicy stone fruit, robust peppers, yet for us it’s the golden treasure of Summer chanterelles that truly stirs our soul. Playing on the magical combination of sweet white corn and earthy golden chanterelles, we present our roasted Zabuton of beef. Placed atop a creamy pudding of delta corn and graced with lightly sautéed chanterelles and a buttery corn jus, we couldn’t think of a better way to celebrate this Summer treasure.

Chef’s Notes: The peaches of the Central Valley of California are one of the sweet and fragrant joys of summer. Native to China, peaches were thought to confrere immortality and were treasured by the ancient emperors, dating back as early as the 1st millennium B.C. The humble peach was introduced to the United States in the 17th century by horticulturist George Minifie, when he plated some trees he smuggled from England to his estate in Buckland, Virginia; though it was not until the mid 19th century that peaches became a commercial crop. The peach eventually landed in California’s Central Valley in the early 20th century, and we continue to reap the benefits. In honor of this, we take local peaches poached with Summer elderflower, paired with jasmine sorbet and a rich toasted barley cream. Ah, Summertime. Bon Appétit!